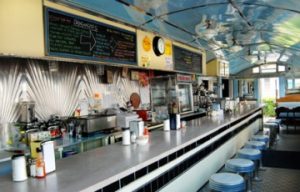 On January 13, 2010, the Central Diner, now known as the Liberty Elm Diner, was listed on the National Register of Historic Places.

Additionally, The Liberty Elm Diner was recognized on February 24, 2010 by the State of Rhode Island General Assembly with a House Resolution congratulating the diner for its addition to the National Register of Historic Places:

The following excerpts are from the draft nomination of the diner to the National Register of Historic Places. The nomination was

On January 13, 2010, the Central Diner, now known as the Liberty Elm Diner, was listed on the National Register of Historic Places.

Additionally, The Liberty Elm Diner was recognized on February 24, 2010 by the State of Rhode Island General Assembly with a House Resolution congratulating the diner for its addition to the National Register of Historic Places:

The following excerpts are from the draft nomination of the diner to the National Register of Historic Places. The nomination was approved by the board of the Rhode Island Historical Preservation and Heritage Commission in early 2009 and by the National Park Service in Washington D. C. on January 13, 2010.

According to Providence city directories, there was a Central Diner on site at 25 (later renumbered 27) West Exchange Street at least as far back as 1932. Note that it was the same business but not the same building as the subject of this National Register nomination. Historic images from the Providence Journal photographic archives provide several glimpses of the first Central Diner in the 1930s. The structure was situated with its length flanking West Exchange Street. The barrel-roof diner had a narrow monitor and awning over twelve windows interrupted by a central front door. The words CENTRAL and DINER are painted on the wall beneath the windows. The manufacturer and construction date of this diner are not known. [10]

Nicholas Venditti operated the Central Diner on site from 1932 to 1936. Between 1937 and 1943 the operator was James Vona, and the street address changed from 25 to 27 in 1941. Vona ran the diner through 1946, when it passed to Ralph J. Narducci, listed in the city directory as president and treasurer of Central Diner Inc. in 1947.

Soon after Narducci acquired the business from Vona, he purchased a new diner from the Worcester Lunch Car Company (Worcester Car #806). Narducci remained in business at 27 West Exchange Street through 1953.[19]

On April 1, 1953, Central Diner Co. Inc. received a building permit to erect a one-story, 8 inch cinderblock diner kitchen at 777 Elmwood Avenue, just a few blocks north of Roger Williams Park. The architect was L.E. Carlone and the builders Campanella & Cardi. The kitchen was built to accommodate the newly relocated Central Diner, which arrived on site between 1953 and 1954. The Sanborn map from 1955 reveals that while the diner and new kitchen were in place in Elmwood, the parcel at the corner of West Exchange and Gaspee streets had been cleared for a parking lot.[20]

Even though Ralph Narducci had moved his diner 2.75 miles southwest from Providence’s central business district to the automobile zone, he retained the business name Central Diner during his tenure through 1968. His successor, Christopher Artegian, continued to operate the Central Diner through 1972. [24]

In the following decades, the Central Diner has witnessed sporadic closures, a parade of operators, and a series of names. The diner was not listed in the city directory between 1973 and 1976 and may have been closed temporarily. Narducci continued as owner at least through April 25, 1975, when he received a permit to erect a new mansard roof over the existing roof and apply Textured-111 pressed wood siding beneath the windows. From photographs and other accounts, it does not appear that the mansard roof was installed; however, the siding was applied and remained intact until the mid-1990s.[25]

Narducci’s builder for the 1975 project was Edward Degrandere, who is listed as operator of the Elmwood Diner in 1977. [26]

The next name associated with the Elmwood Diner was Philip D. O’Donnell, who received a building permit on November 24, 1987 to erect a one-story, 20 foot 3 inch by 20 foot 3 inch dining room addition on the rear northwestern corner of the building. The addition, which was to cost $10,000, was designed by an architect named Nalbandian (first name unknown). O’Donnell is listed as diner operator in the 1988 city directory. By 1990, it was called Jim’s Diner. By 1993, Jennifer Davis had purchased the diner and renamed it Jenn’s Elmwood Diner, where she served soul food on Saturdays. A photograph of the diner from this period shows the lower half covered with wood siding and the stainless steel entrance vestibule is unpainted. According to photographs, the stainless steel vestibule was installed between 1956 and the 1970s.[27]

The Central Diner was rediscovered by new operators who appreciated its historic character and renovated the restaurant as the Ole Elmwood Diner. Working with the American Diner Museum, Paul Truman and Steve Calabro overhauled the structure, removing siding, repairing windows, removing grease, and reinstalling old fixtures. Around 1997 or 1998 it was known as Louie’s Diner. In 1999 the diner was owned by Robert Lama, who called it Roberto’s Cafe. By 2004, it was La Criolla Restaurant, serving Dominican food.[28]

In 2006, Elmwood resident Carol DeFeciani purchased the property and initiated the Central Diner’s latest makeover. Improvements include upgrading the electrical system and replacing the heating system; repairing the doors and barrel roof; replacing missing light fixtures and windows; rebuilding the vestibule; and dramatically removing the exterior cladding and stripping several layers of paint from the original porcelain panels.

Historian Richard Gutman remarked that in 2004, only about 90 of the 651 diners built by the Worcester Lunch Car Company survive. In Rhode Island, only four documented Worcester diners are still in operation today—the Right Spot (formerly known as Brothers) in Pawtucket; Jigger’s in East Greenwich; the State Line Diner (Worcester #846, 1953 or 1955) which was relocated to Foster from Southbridge, Massachusetts; and the Central Diner in Elmwood.[29]

The Central Diner’s latest name is The Liberty Elm, signaling the owner’s pledge to direct one percent of profits to purchase new disease-resistant American Liberty Elm trees for Elmwood Avenue. The elm trees that once lined Elmwood Avenue have succumbed to Dutch Elm disease or street widening. DeFeciani intends to replant the elms in Elmwood and keep the coffee brewing for neighborhood residents and commuters headed down the avenue.[30]