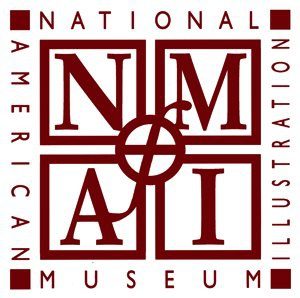 The National Museum of American Illustration (NMAI) was founded in 1998 by Judy Goffman Cutler and Laurence S. Cutler to house their art collection primarily from the ‘Golden Age of American Illustration,’ yet the museum exhibits American illustration from all periods, styles and talents. The Museum venue is Vernon Court (1898), an interpretation of an 18th century French chateau from the ‘Gilded Age of Architecture,’ designed by Carrére & Hastings, architects for many notable landmark buildings such as the NY Public Library, the US Senate and House Office Buildings, Lord Duveen’s New York Galleries, the Neue Gallery, The Flagler Museum, and The Frick Collection. The three-acre grounds were inspired by King Henry VIII’s gardens created for his ill-fated Queen Anne Boleyn at Hampton Court Palace. The adjacent three acres originally known as Stoneacre (1884) was designed by the first American landscape architect, Frederick Law Olmsted. This property has been restored and revitalized into The Frederick Law Olmsted Park, the only property named in honor of the nation’s first landscape architect. In the future, a Memorial Arch designed by and in honor of Louis I. Kahn, America’s greatest architect of the last half of the 20th century, will be erected in the Frederick Law Olmsted Park.