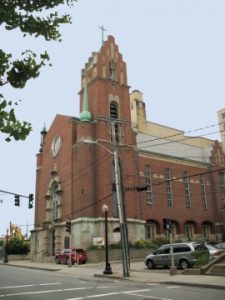 Swedish architect Martin Hedmark collaborated with the Providence firm of Jackson, Robertson and Adams in the design of this unusual structure. The church was founded by seventy-five Swedish immigrants in 1890; the congregation exceeded 700 by the 1920’s and had outgrown the original church on this site. Hedmark’s design for the church draws from precedents in his homeland and unifies this vernacular style with an elaborate Trinitarian iconography and traditional ecclesiastical format into the most architecturally noteworthy 20th-century church in Providence. It is a unique local example of a mixture of modernism and native architectural forms which enjoyed a particular popularity in Scandinavian countries. Architectural nativism in ethnic church architecture was a fairly common phenomenon in early 20th-century America, and this is an extreme and very fine example