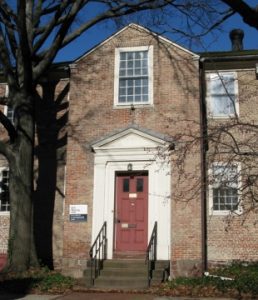 The Old Brick School House has a long and illustrious history as a site for assembly and education, and PPS is proud to continue its use as such. Trustee and committee meetings are held here regularly, but, appropriately, the building is not exclusively for internal use. PPS has also hosted educational events for the community there and, on occassion, gatherings of other organizations.

History
The Old Brick School House, a small but dignified building, embodies a special kind of significance in the history of Providence. For two centuries it has served various institutions committed to promoting educational values within a free society. In the upstairs room, the Corporation of Brown University met in the 1770s to determine the location of the College, relocated from Warren, and later, University classes were held in this room during the Revolutionary War when French troops occupied University Hall.

The School House’s history represents the struggle by a courageous group of citizens to establish a free public school system within our new and independent society, a venture spearheaded by John Howland. Howland was a simple man, with little education, and only a barber by profession. And yet he may rightfully be called the “father of public school education in America.” He was intensely committed to establishing free public education for Rhode Islanders in the 1790s—a concept that was very progressive for the 18th century.

Although Rhode Island proudly boasted the presence of the College, now Brown University, at that time the new state had no respectable comprehensive system for educating the youngsters of its community. Through persuasive articles and several petitions to the General Assembly of Rhode Island, Howland’s request for free public education was finally granted. In 1800, one of the first free public schools in America opened at 24 Meeting Street. For this far-reaching achievement, Brown University later awarded Howland an honorary degree.

The Brick School house from that point on served many educational functions. Among its occupants were a school for black children, a cooking school, and a fresh air school for tubercular children, the first such program in America. From 1946 to 1957, the Meeting Street School met in the Brick Schoolhouse, devoting its energies to teaching children with cerebral palsy.

It is a direct, simple two-story timber-framed brick building with a foundation of rough stone. Originally the first and second floors were single large rooms with fireplaces at both ends, now altered slightly by dividers but still bearing the high wainscots of horizontal boarding which reach to the high window sills. The trim is direct and austere. In 1965 appropriate sashes and window shutters copied from 18th century models were installed. Through the efforts of the Providence Preservation Society, the Brick School House has been carefully restored and retains the sense of simple, open space which originally characterized the learning environment in the 18th and 19th centuries. Although it stands somewhat crowded by current neighbors, the Brick School House still makes a significant statement about the democratic and civic ideals of 18th century Providence.