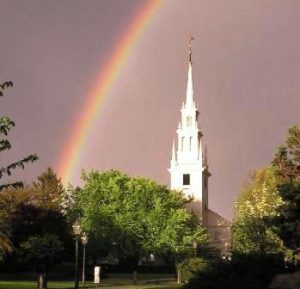 The Anglican Church came relatively late to Newport; early settlers moved here to get away from the Church of England. By 1698, however, there were enough Anglicans, joined by Huguenots and Quakers, to form Trinity’s first congregation.

The congregation quickly outgrew its 1701 home, and in 1726 built the church in which it worships today. The box pews helped to keep warmth during the winter. Their various shapes and sizes reflect the individuality of the members of the congregation, who paid for their own pews as a way of defraying the cost of the building. The first and second bays at the altar end were added in 1762, as the congregation continued to expand.

A striking feature in Trinity Church is the wine-glass or chalice-shaped pulpit. It indicates the importance of preaching during the colonial period, and the sermon at Sunday services is still given from it today. Most colonial churches had central pulpits, but many later moved them to the side. This is the only center-aisle, freestanding, triple-decked pulpit left in America today.

The chandelier closest to the Tower is original, made in Exeter, England, by Thomas Drew in 1728; the other three are reproductions. They seem to hang a little to the north, but actually it is the building which leans, showing the impact of three hundred years of winds from the sea.

Up in the rear balcony is the organ; the center of the facade and front pipes are all that remain of the original instrument. The crown on the top of the organ case stands for Queen Anne, monarch when the church was built; the two bishop’s mitres stand for the Archbishop of Canterbury and the Bishop of London, under whose jurisdiction the colonial church fell.

The original organ was a gift from Dr. George Berkeley, later Bishop of Cloyne (Ireland). Bishop Berkeley spent three years in Newport and was much indebted to the members of the congregation. It was Bishop Berkeley who posed the famous question: "If a tree falls in the forest, but there is no one to hear, is there sound?". Local legend has it that the Bishop first formulated his query while meditating in his favorite retreat, a niche (still called "Bishop’s Seat") in the craggy rocks overlooking Sachuest Beach.

On the south side of the main aisle, adjacent to the Clerk’s Desk, is a box pew ornamented with engraved silver plaques commemorating visitors of special significance who were seated there. The earliest of these is George Washington; others include Queen Elizabeth II, Prince Andrew, and Archbishop Desmond Tutu and his wife Leah. Archbishop Tutu addressed Trinity’s congregation a scant two weeks after learning he had been awarded the Nobel Peace Prize. As an aside, he smilingly mentioned that the Nobel Peace Prize was excellent life insurance.

A sailor reaching harbor in Newport in the 1970’s was struck by the interesting juxtaposition to be observed from the harbor: Trinity Church’s classic spire soaring heavenward, visually cheek-by-jowl with the stark, grimy smokestack of a nearby dry-cleaning establishment. The unavoidable conclusion was that the mismatched pair of towers represented "Cleanliness Next to Godliness." The smokestack was later demolished.

From 1985 to 1987, Trinity Church underwent a major restoration under the "Save Historic Trinity" program to stabilize the grand old building, which had developed a serious list from centuries of pressure from ocean winds. Anchors, appropriately called "deadmen." were installed in the old graveyard on the north side of the church, bracing the structure. Ceiling plaster was stabilized and/or replaced. After careful research, the interior and exterior of the church were painted in their original colors. The tower clock was taken down, cleaned, and polished. And through it all, the tradition of having Sunday services in the church every week since the church was built was kept alive by 12 parishioners each Sunday, chosen a dozen at a time, alphabetically, from the parish roster. These privileged souls were encouraged to wear jeans, required to remain standing in the center aisle throughout the service, and treated to an insider’s look at the latest developments afterwards.

Today, visitors to Trinity are welcomed by members of the Guides Committee, fondly known as the "Sitting Saints," who delight in pointing out all the fine details of our beautiful church, lovingly built by human hands to praise God’s glory.

The motto of Trinity’s three-hundredth anniversary, "Only in Christ and only together" is the spirit in which this active, contemporary congregation accepts and carries out ministry in its fourth hundred years.