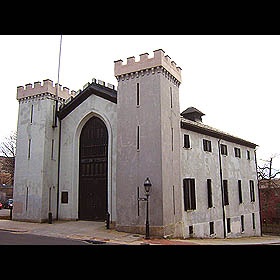 Few buildings along Benefit Street standout like the Benefit Street Arsenal. Both in its façade and use, the Arsenal offers a pleasant surprise among the already varied Benefit Street, soliciting the passerby to stop for at least a moment to look over the structure. Constructed in 1839 out of chipped stone covered in cement, which was originally incised to replicate stone, Russell Warren’s building appears as an edifice from another time, and one totally un-American, much like his Manning Hall on the Main Green of Brown University. Calling up easily recognizable visual references, Warren marks both structures by his use of painted stucco, formed and grooved to appear as stone, as genuflecting copies of more venerable monuments.