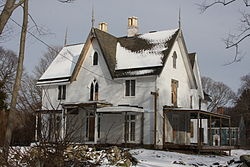 The house was designed in 1848 by architect Russell Warren on sixty acres of DeWolf family land given to Charles Dana Gibson (the grandfather of the famous artist bearing the same name) upon his marriage to Abbey DeWolf, the daughter of the late Senator James DeWolf.  Warren had built many other important buildings in Bristol for the DeWolf family, who rose to prominence through the slave trade.  In 1901, the house was passed down from Abbey DeWolf Gibson to granddaughter Josephine Gibson, who became the longtime chatelaine of the estate. Josephine was one of the models of the "Gibson Girl" illustrated by her brother, named Charles Dana Gibson like her grandfather. Longfield was a center of social and artistic gatherings until Josephine’s death in 1969. Her son, bookbinder Daniel Gibson Knowlton, sold the house in 1972. In May of that year, it was nominated to the National Register of Historic Places. Public records indicate that it is still being used as a private residence. Daniel built an adjacent home and bookbindery named Longfield Studio on the property at 1202 Hope Street.  There are other smaller houses and cottages on the property, originally constructed to house servants and caretakers.

The house is a slightly altered example of Gothic Revival architecture interpreted in wood. According to a National Park Service survey, the foundation of the house is of stuccoed stone and the walls are constructed of wood clapboards. The house has four chimneys. The original cut-out bargeboard trim was removed from the gables around 1907. The front porch was rebuilt with a steeper shingled roof and its Gothic bracing and wooden crockets were removed. The Gothic window over the front porch may have had its sill-level raised. The south side porch was enlarged from a half-octagon shaped protrusion, which had been accessible from only the south parlor window. Its Gothic balustrade, bracing and parapet railing were kept. The original exterior window blinds of the house are stored in the attic. The rear entrance porch was rebuilt in 1963. The original partition separating the front southwest bedroom from a dressing room was removed. The house originally had a wood-shingled roof and was painted light red with darker trim. As of 1979, the house was painted white with black trim.