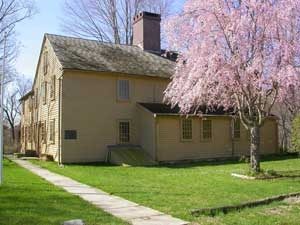 he Smith-Appleby House at 220 Stillwater Road is the headquarters for the Historical Society of Smithfield and is open to the public. The original portion of the house dates to about 1696 when Elisha Smith (b.1680 – d.1766) of Providence moved to Stillwater and built a single room home with a small loft. The house was a “stone-ender”, meaning, one wall was composed entirely of stone. This stone wall held a large fireplace used for cooking and heat. Elisha was a farmer and he eventually acquired 721 acres of land surrounding the present-day house. In addition to farming, he built two mills on his land. The remains of one of these mills can still be seen today at the rear of the house. Elisha married Experience Mowry and together they had 10 children; seven boys and three girls. As the sons got older, the land was subdivided into 100 acre parcels among them. According to local records the girls did not inherit any of the land. Elisha died in 1766 and was among the first to be buried in the cemetery located on the grounds of the house.