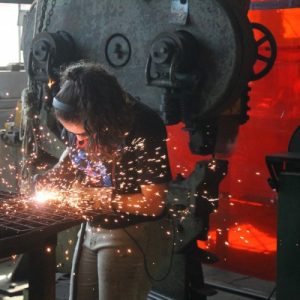 The public is invited to join New Urban Arts’ students, staff, board of directors, and community of supporters for a tour of the expanded facility which includes a recording studio, a digital media lab, and more space for screen-printing and apparel.

The renovation of the new studio was funded, in large part by the Rhode Island State Council on the Arts’ Cultural Facilities Grant Program, allowing New Urban Arts to increase the size of their studio from 3,600 to almost 5,000 square feet. New Urban Arts hosts a number of free arts programs for low-income high school students.

The grand re-opening celebration also kicks off New Urban Arts’ 20th Anniversary year and commemorates the organization’s two-decade history of working to build a vital community that empowers young people as artists and leaders. According to executive director Daniel Schleifer, “we are so excited to kick off our 20th year by re-opening with more resources than ever for our City’s creative young people.”

Event highlights include a ribbon-cutting ceremony as well as an exhibition of art work created this summer by New Urban Arts’ Summer Art internship students. Light refreshments will be served.