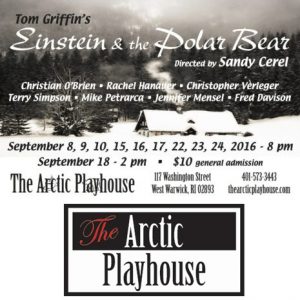 The setting is a cluttered farmhouse in Spider Lake, a rural New England town.  Residing here are Bill Allenson, a highly regarded but no longer active novelist, and his ailing father, Andrew.  The reclusive Bill sells rare books through the mail.  Diane Ashe, whose car has broken down in the middle of a blizzard, appears at Bill’s door.  Bill offers her his extra bedroom for the evening, and Bobby Bullins, the garage owner, is notified of Diane’s car problem.  As Bill and Diane become drawn to each other, more is revealed about Bill’s past and Diane’s motives.  Her presence is not as accidental as she had claimed.  The play gets its title from two of the subplots, that are woven throughout.  Andrew repeatedly begins, but never seems able to finish, a story about the time that he met Einstein in a coffee shop.  Meanwhile, an escaped polar bear from the zoo is being tracked by the locals, including Bill, who can’t bring himself to shoot “Pinky”.