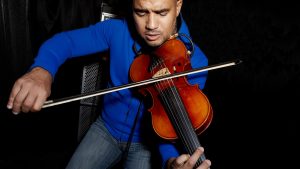 Presented by FirstWorks at First Unitarian Church of Providence,

Renowned violinist/composer DBR collaborates with local music makers in a concert infused with electronic, urban, and classical sounds, celebrating a worldview of civil rights for all.

One of the most innovative artists of his generation, Haitian-American composer and violinist Daniel Bernard Roumain (DBR) is hailed by the New York Times as “omnivorous as a contemporary artist gets!”

As FirstWorks’ first Artistic Ambassador, DBR’s work with local artists reaches a joyful new peak in this concert featuring six of Providence’s own creative voices. From Bob Marley to the Haitian and Israeli national anthems, “Redemption Songs” is a composer’s view of our desire to define ourselves, our world, and sometimes, one another.

The Humanist Septet is:

Part of FirstWorks\’ Raise Your Voice project. Made possible in part with support the National Endowment for the Arts and Providence’s Department of Art, Culture + Tourism.