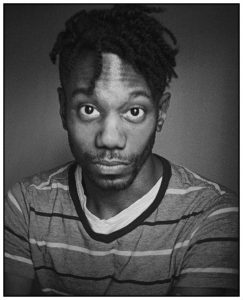 Counter-Productions Theatre Company is proud to present CPTC Resident Artist Ron Lewis in an evening of devised theatre entitled “We Made The U.S.” at AS220. May 10th, 11th at 7:00pm 95 Empire Street, Providence, RI Admission $10

Counter-Productions Theatre Company is proud to present CPTC Resident Artist Ron Lewis in an evening of devised theatre. Ronald K. Lewis is a theatre artist, teacher, writer and arts administrator, originally from Jacksonville, FL. As an actor, dancer, and director, Ronald has worked with Counter Productions Theatre, AS220, Strange Attractor, The Wilbury Group Theatre, Rites and Reason, Brown University, among others. Ronald is co-creator of the film festival, The Wandering Mercuries, which toured from Providence, RI to Chicago, IL in 2012 – via bikes – making stops at libraries and communities centers in 11 cities. Ronald’s first devised-theatre piece, God Made Me Queer, debuted in 2015 (AS220) Heurisko: a play about found things, was featured in AS220’s Modern Movements Festival in April 2016 and toured to Cornell University in Ithaca, N.Y. Ronald co-founded the interdisciplinary Providence-based collaborative The Low Mountain Top Collective with whom he has devised 3 new works. He works as the Dance Program Manager at AS220 and is a 2015 graduate of Rhode Island College.
Ronald is a CPTC veteran, having performed in several of our productions, including Cabaret: The Musical at the Stadium Theatre and the world premiere of Nico Was A Fashion Model, our first production at AS220. Ronald, we firmly believe, is one of the most important artists operating in Rhode Island, and we are thrilled to call him a CPTC Resident Artist.